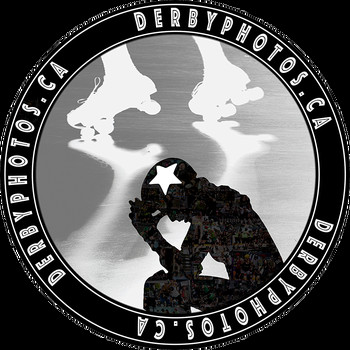 I have been photographing roller derby since 2013. I started off photographing bicycle races and dreamed of doing it full time. While I did photograph the World Cycling Championships when they came to Hamilton I never went further than that. I photographed nudes for awhile after that. Then I migrated to a social event, that happened while riding your bicycle, called Critical Mass and photographed that for over ten years.I photographed and filmed while I rode my bicycle. I self published a book called, "Critical Mass Toronto, Celebrating Friends". I also got involved in using photography as an activism tool. Somewhere along the way I began photographing nude couples for a time. Then I got introduced to roller derby and have been addicted since. I do not do much photography of anything else anymore. I occasionally experiment with some old ideas I have in bouncing around in the my head.

Been published. Toronto's NOW Magazine, Toronto Sun, Walrus, some foreign art and activism magazines...the names of which escape at the moment but mostly niche interest small publications. Self published another book but did nothing to promote it. My work has been shown on walls before. Either at solo shows, some which were self financed, group shows and galleries. A dozen or so pieces were sold to private collectors. I was on the verge of my first paying international commercial job that would have given me a lot of exposure and then 911 scuttled it.

It is a fast and exciting game. So much to photograph in a game. The fans and players are great. How I got introduced to it is one of those age old stories that I will not talk about. LoL.

Will you photography our game?

Yes. Just send me details. Timing and location will decide if I can make it. darrenstehr(at)gmail.com

Why have you stopped putting photos up on FB?

Two reasons. First, I find it difficult reading some of the nonsense that gets put on FB. While I do not believe in censorship I will not provide them free content to increase their visits. Second, it is also about providing them free content. FB goes through the trouble of protecting the rights of music creators and video creators but really does nothing for photographers. There is a third reason too. FB has become too cumbersome to handle several galleries of games and the quality of the image is up to them.

Can I still share your photos on FB and other social media?

Yes, provided it is not for commercial purposes. There are links in the photos to help you do it. Yes I know this seems to contradict what I just said in the previous answer. I am ok with this indirect approach as it is not supplying them content directly or rather I am providing it on an as needed basis.

Can I hire you to photograph our game or buy one of your roller derby photographs?

Short answer, no. I am not in this for the money. I hate paperwork. If I start to work for money it will cost me money to fill out paperwork. Photographing roller derby is much more valuable to me for stress relief and fun.

Long answer, still no mostly. From time to time a business that supports derby will want a photo for advertising. If there are no photographs from other photographers available to use I will provide the file but you will have to donate an amount to a local charity. This amount is to ensure that I am not undercutting photographers who are trying to earn a living from photography.

Can I hire you to photograph non derby stuff?

How come there are no photographs of me? Will you post clothing malfunction photos? Censor?

These questions all seem to come together.

At every game I try to get at least one photo of every player. Then I follow the action. Sometimes that is not the jammer(s) but rather something happening elsewhere on the track.

I have photographed over 150 games/scrimmages. I have yet to see a clothing malfunction.

I do not believe rules can cover off things that should not be published/photograph. Rules tend to work for 80% of the situations and fail for the other 20%. Using context, and relevance for that matter, is a much better approach. I am not there to photograph people to embarrass them or make fun of them or for "thrills". Rather to tell the story of the game and photograph in that context. While a photograph of a player showing near exhaustion would most likely meet context, a player throwing up into a trash can cause of nerves would not.

One of your photos of me/another player is on a "T&A" site?

Please report this to me right away. This is not a permitted use. There is a group of roller derby photographers that find these photos pretty fast and begin take down notifications just as fast.